Mobile updates ahoy! Google is all set to launch its AMP (Accelerated Mobile Page) project at the end of this month. In fact, they have already started testing it in mobile web searches, in their news search carousal. Even Google Search Console, formerly Google Webmaster Tools, have integrated AMP testing tool in its growing arsenal. But before we dive in to its technicalities and the uses, let’s get to know more about what AMP is all about, shall we?

AMP, or Accelerated Mobile Pages, is a project launched by Google to streamline article searches in mobile by having them load instantly. With Google putting more and more emphasis on mobile searches, and subsequent optimization of websites to make them more mobile friendly, AMP will play a big role in the Digital Marketing business in the days to come.

The image below will give a general idea about how mobile web usage has increased over the years:

To speak plainly, AMP provides a stripped down version of mobile web, called AMP-HTML. It dumps traditional web elements that slows down a website, e.g- JavaScript and other third-party scripts, and as a result provides a fast loading and no-frills version of a webpage. AMP also caches content, so that Google can fetch the page quickly. It has been claimed that AMP HTML can make any website load approximately 14% to 85% faster than normal HTML based websites.

Currently, businesses who generate revenue through ads displayed in webpages, are facing a lot of problems as more and more people are using adblocker, a free tool that blocks ad pop-ups to improve user experience. Google has taken this factor into account by releasing new support platform to display ads in AMP pages, without hurting user’s experience.

AMP has been designed “from the ground up” so that it can be pre-rendered efficiently. Pre-rendering has been supported by every major browsers for a long time now through a tag. But this method should be used sparingly as pre-rendering can prove to be expensive. With AMP HTML, a page is rendered automatically, but it also takes the hardware and software limitations of the device into account, so as to avoid straining the device’s CPU. This way, AMP will in many cases render a webpage even before a user clicks on it. You can find more details about creating an AMP page here.

To quote Google’s guidelines, “if you have both an AMP and non-AMP version of your webpages, include the following links:

On any non-AMP page, reference the AMP version of the page to let Google and other platforms know about it:

On the AMP page, add the following text to reference its non-AMP canonical version:

For standalone AMP pages (those that don’t have a non-AMP version) the AMP page should specify itself as the canonical version:

The screenshot below will give you an idea about AMP: 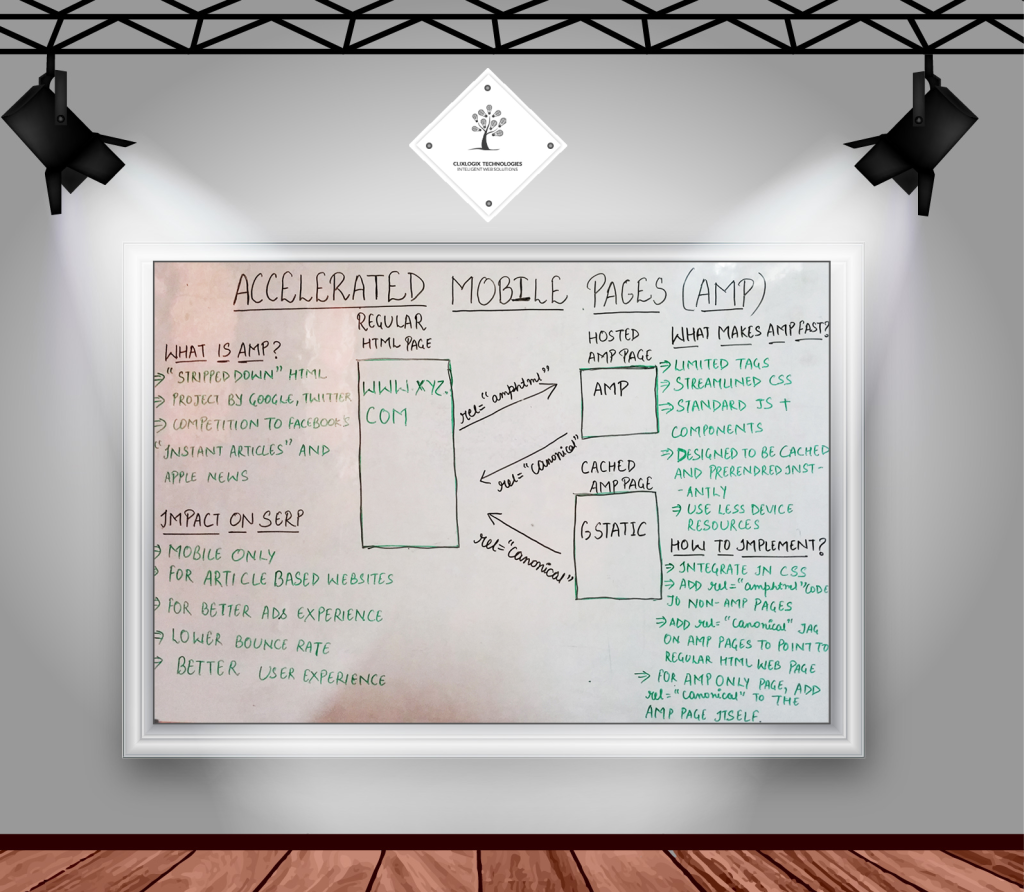 So what exactly does the inclusion of AMP mean for Search Engine Marketers and brands? Well first of all, if your website is not mobile friendly, you should start working on that, and soon. Brands which ignored Google’s mobile search updated that was launched in early 2015, might have already faced reduced traffic flow in their website(s), and subsequent drop in rankings in Google’s search engine. AMP will make sure that those brands fall even further behind their competitors – whose websites have been made mobile friendly, and who have moved ahead in search rankings – by reducing their web traffic even further as their websites get pushed down the SERP (search engine result pages). So this might be a pretty good time for those brands to wake up and make their website mobile friendly.

The image below will give you an example about the websites who had suffered and gained the most during the so called Mobilegeddon update:

TL;DR, AMP can affect your brand’s website in the following ways: 1. Improve User Experience: This will be accomplished as AMP based webpages will load faster than non-AMP websites, ensuring that users won’t have to wait forever for the webpage to load. 2. Improve Website Traffic: A fast-loading website will not be closed by users with slow internet connection, thus increasing user traffic in the website. 3. No Need to Change Advertising: You can maintain the choice of ad networks using AMP HTML.

As we know, Facebook and Apple have introduced Instant Article and Apple News respectively. They basically allow articles to load quickly in mobile devices as those articles are pre-rendered. Instant Article and Apple News also often don’t allow embedding of advertisements in the articles, making load time almost nil. This practice hurts Google’s AdSense, as ads are not displayed in the articles. Google hopes that with AMP, such concerns will become moot.

Right now, AMP is being used to improve publisher websites. This is because websites whose goals are to distribute anything other than contents and ads will find that the limitations of AMP are too restrictive. But we believe the success of AMP will convince Google to integrate AMP for other websites too in the future. But for now, websites which are not mobile friendly should buckle up, as such mobile specific updates will become more and more common, and will help in separating the “wheat from the chaff”. John Mueller, in a Hangout video, has stated that AMP is not a ranking factor as of yet. To quote him: “Is AMP a ranking signal? At the moment, it is not a ranking signal. It is obviously one way to make mobile friendly pages, so that might be an option where you do that. I’ve already seen some web sites where they’ve moved the whole web site to the AMP format. Obviously that is mobile friendly setup so it kind of picks up the mobile friendly thing. But just AMP itself is not something that we have a ranking signal at the moment.” You can check the Hangout video here:

So right now, AMP will not affect your SERP ranking, but that doesn’t mean that it won’t be in the future. The best that most SEO companies & website owners can do is to stay ahead of the game & adapt AMP HTML technology as soon as possible.