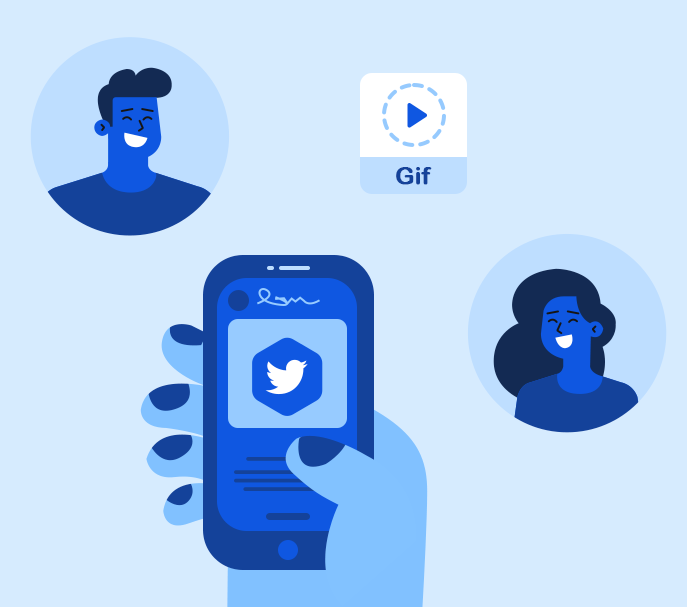 Coming back to twitter, alike other video contents on timeline, GIFs will be accompanied with an overlaying play button. Users can’t share video on twitter, unless they use VINE . GIFs could earlier be shared through the third-party platform Giphy only. The new GIF native support directly in the tweet-box will surely enrich user’s experience. This has made posting a GIF file hassle free in the same manner as images are shared.

GIFs have been made viewable on Twitter’s website and their official iPhone and android mobile apps. However few platforms like tablets and windows phones have been left out in cold. It is to be noted that, you can’t upload multiple GIFs as you do with images. Furthermore, you’ll be shocked to know that, the GIFs posted don’t remain in the same format.

Get ready to be amazed at extra-animated twitter timeline. Yes! Posting GIFs made easy by twitter starting this Wednesday. Check out the official announcement. Being lost among technological advancements like video compressing for years, a 25 years old format, created as a blend of photo and video has recently got popularized across social media, since Pinterest added it in January this year.

A recent study suggests that 63% of social media is compiled of images. In this era of internet marketing being ruled by the visual content, GIF supporting Social Media sites are growing in number but majors like Facebook are yet to incorporate it. An image depicts the happening but GIFs display it telling the story of a paragraph in a simple yet dynamic way. GIFs have always elicited a quick emotional response from viewers.

Technically, these file are neither images nor a sequential setup of images. Once uploaded, they get converted to soundless MP4 files embedded with HTML5 video tag. Forget it! What’s there in the name? Oops! Format.

As of June 2016, Twitter has introduced Autoplay feature for both GIF & Videos, alike. Most hardcore Social Media Agencies are milking this new add on feature “the right way” to capture better clickthrough rate for their social links. Here are some good examples of brands doing it the right way with Social Media & GIF:-

4) Budweiser – responding to one of its fan in a tweet with GIF image.

Most Leading Social Media Management Companies & Agencies have confirmed that using Twitter GIFs have boosted their Social Media Campaign Clickthrough rates. Using GIF adds an emotional quotient that sets your brand’s message into a dynamo with your audience as opposed to static HD images. Several brands are using GIFs to show off their latest product launches. Using GIF allows a 360 degree view of the product in a single post. It adds a power-packed punch when it comes to announcing new product rollouts on Twitter.   Happy GIF-ing!