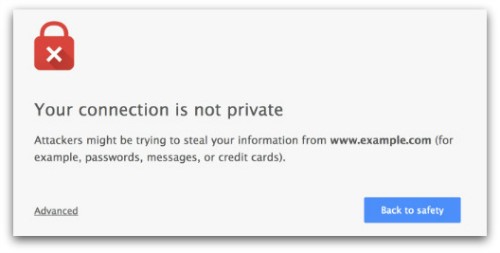 If you own a website that is still using the HTTP version, you should consider getting an SSL certificate for your website and upgrade to HTTPS. Why you ask? Well, that’s because Google has already started sending messages to webmasters and owners of HTTP versions of websites, stating that come October, any website which is using Forms, including comment forms, to collect user information, will be flagged as ‘NOT SECURE’. This update will begin with the version 62 of Google Chrome and will affect all HTTP webpages.

In addition, this update will affect all the HTTP version of websites that users visit using the much vaunted ‘Incognito Mode’, whether or not those websites have any forms in them.

The warning by Google can be seen on the screenshot below:

Why Google Is Making Such A Drastic Push

Google has been advocating the use of HTTPS over HTTP for quite a few years now. The reason for this drastic step forward is pretty simple – Google’s motive has always been to provide a rich experience to its users, which includes a securer web browsing. A push for HTTPS is simply about Google realizing its goal. In fact, recent increase in cyber attack incidents has shown the world that the internet needs to be policed and secured further.

Surveys carried out in 2014 and 2015 revealed that the number of adopters of SSL/HTTPS remained quite few, which is troubling in this age of information. Unsecured websites can lead to loss of precious data and can wreak havoc if found on wrong hands.

How Does HTTPS Impacts SEO?

Studies conducted by various experts have shown that websites which have switched to HTTPS are already occupying most of the top 10 results of Google search. Switching to HTTPS should be a carefully planned step. Proper redirection methods, mapping of new to old URL and changes in sitemaps and robots.txt files must be planned out beforehand.

Over the coming days, this is going to be a necessity for most website owners. Almost 44.4% of netizens prefer Chrome, which is a huge number. Imagine the number of lost sales and conversion figures if your website is flagged as ‘unsecure’. From an SEO point of view, this update is critical.

Where Do Things Go From Here?

If your website is HTTP only, and contains text fields such as < input type= ”text” > or < input type= ”email” >, you need to switch to HTTPS stat. Google is also serving warnings to webmasters who have both HTTP and HTTPS version of websites. So it’d not be a good idea to preserve both HTTP and HTTPS version of websites. This update might go live for Chrome users only for now, but it is just a matter of time before it affects other browsers as well.