Going Mobile Only, Not The Best Approach – Google

Mobilegeddon was perhaps one of the most significant update that Google rolled out in 2015. There has been a significant shift in the number of mobile devices that are now outnumbering desktop sales. Earlier on 17th August, while discussing the merits and demerits of a “mobile only” website – John Mueller clarified how  Google treat’s websites that do not have a desktop version.

The question asked was with regards to a user inquiring with Google’s John Mueller that if having a “mobile only” website is OK for a product that targets just the mobile users.

The above gave way to a lot of confusion among webmasters with several asking if Google is not considering User Experience as an important factor anymore? Its a fact that when we compare mobile versions with desktop, user experience on tablets and cellphones is way lower than on a desktop. Here is a study from Monetate confirms this:- 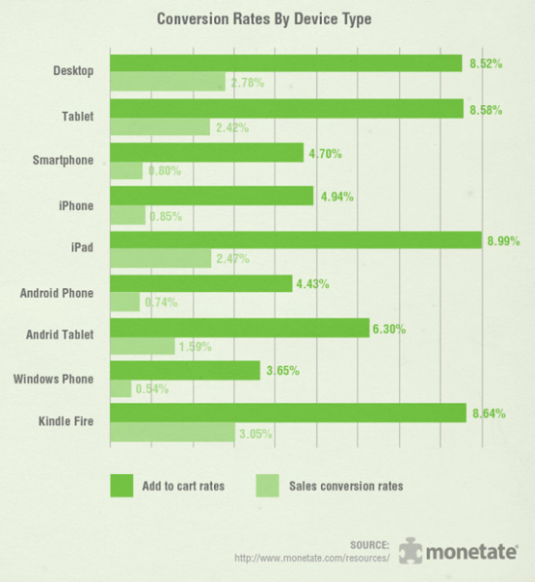 Several SEOs started speculating, if going Mobile Only is the best approach then? Is Google still going to rank Mobile only sites as well as Desktop sites? Earlier today, John clarified on his Google+ post that – a mobile only site is perhaps not the best practice either.

John went on to explain further that if a business goes with the decision of having a mobile only site, then perhaps that’s what Google is going to index for its searches.

The Most Important Take Away

Lastly, John was amply clear regarding the fact that the best way off the both worlds is to go for a website that uses responsive web design techniques so that its interface adjusts itself according to user’s device. He also did away with the confusion that he raised in his previous advice on Google+ by saying

I can imagine some sites starting off with only a mobile-friendly website (it’s kinda like businesses that use a mobile app instead of a website), but I’m sure most would do well to also provide an awesome experience for users with larger screens (be it a desktop, laptop, mobile, TV, etc.).