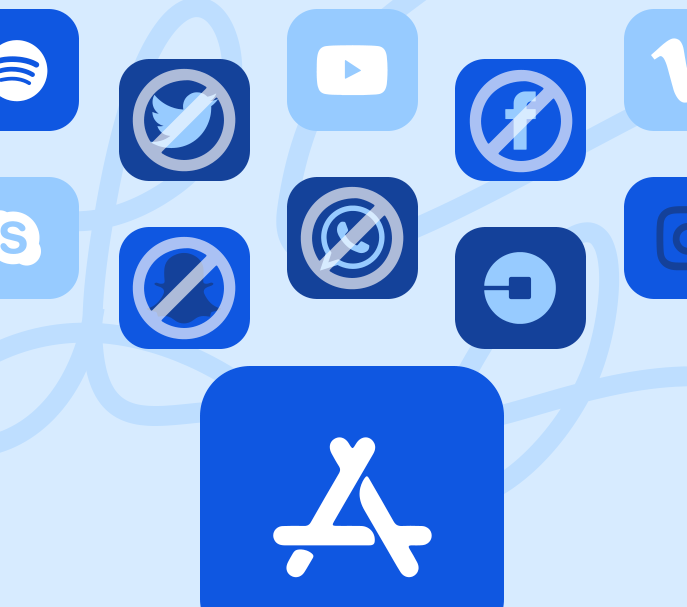 Apps are everywhere these days. Right from getting you a ride to getting you a date – apps do it all. But if recent reports are to be believed, some of your most favorite apps might not exist in the very near feature.

In fact, we can even list a few reasons why you and your business absolutely needs a mobile app.

With recent developments at Cupertino – Apple’s home, it might very well be that your favorite apps along with over 180,000 apps are rendered obsolete in near future.

The reason? Well Apple’s finally had it with these old-engine running apps in their ever-advancing app store. A recent statement from one of Apple’s developers hints at stronger action against iOS apps that are built on the old 32-bit architecture.

What is Apple About To Do?

In order for us to understand why Apple has suddenly turned against these apps, we need to go to September 2013 when the iPhone 5S was launched. With that iteration, Apple also debuted their 64-bit architecture for its iOS apps.

As is the custom with every such major iOS update, the developers were supposed to adhere to the guidelines and update their applications to use the latest resources.

A few months down the line, Apple started displaying a warning on the apps that hadn’t been updated with the 64-bit support, saying that “the app may slow down your phone”. Although, the difference in the speed was found to be insignificant, Apple has been increasingly strict about developers adopting this guideline and now things have really come to fore with the new iOS 10.3 beta.

32-bit applications have started showing alerts saying that the app that you’re running “will not work with future versions of iOS.” The warning goes on to say that the “developer of this app needs to update it to improve its compatibility.”

Before we dig deeper into this, let’s take a step-back and delve into what exactly 32-bit and 64-bit architecture entails.

A processor is the heart of any electronic device, which by default includes your iPhone or any other mobile device for that matter. A layman would look at the 64-bit processor’s name and reach the conclusion that it is twice as fast. Well, he won’t be wrong if truth be told. A 64-bit processor can pick up data in 64-bit chunks making it possible for the device to access large amounts of data and make large calculations more efficiently as compared to a 32-bit processor.

In addition, the 64-bit processor also removes a memory ceiling. Essentially, using a 32-bit processor means that you won’t be able to have more than 4GB of memory (RAM) in your device. Which means, Apple is preparing for the future. With a positive upward trend in “app sizes” and them becoming more memory intensive, the future iPhone might very well feature 4GB of RAM out of necessity and not just because Apple can.

And when that day comes, Apple will stand prepared, quite unlike everybody during 2017 US Presidential Elections.

But Why This Sudden Animosity Towards 32-bit Apps?

Apple has been playing a long game when it comes to adding 64-bit processors to their devices.

Since iPhone 5S, no new device was ever launched with the older 32-bit architecture and developers were continuously reminded to rewrite their applications to support the new processors.

In September 2014, exactly after a year when the 64-bit processor was first launched, Apple discontinued iPhone 4S and iPhone 5C which happened to be their last devices to include a 32-bit processor.

This change from 32-bit to 64-bit was necessary because Apple couldn’t have it both ways when it came to telling the developers to update their applications. The reason for this would get clear once we understand the following point.

This led the developers to believe the following:

Updating their application to support 64-bit would make their apps not support the older 32-bit phones.

But now, it’s been about 4 years since the launch of the 64-bit processor in a mobile device and iPhones with 32-bit processors have almost disappeared from the market.

This is the time that Apple had been waiting for, when even the most paranoid of developers should update their applications without having to think if their application would still support the older iPhone devices – because there simply aren’t many such device left. 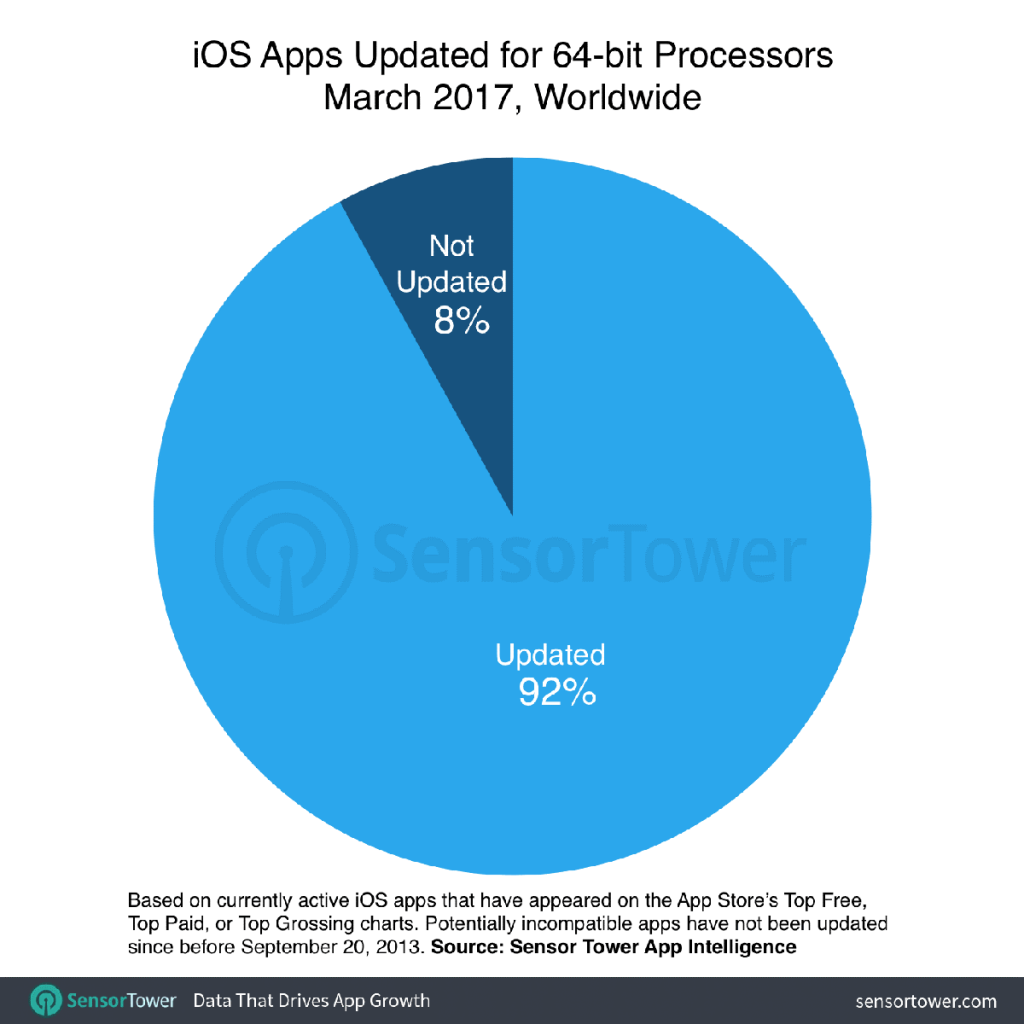 What Does This Mean For The Users & The Developers?

If you have been enjoying iOS apps for several years, it is likely that several of your “first great” apps will be purged in upcoming iOS updates.

Apps like Ocarina and Great Lightsaber, among the greatest iPhone apps of all time, are in danger of facing the gauntlet. Games, particularly those from indie developers, could be facing their doom as well.

Several popular developers have noted that this move will likely make developers abandon their old apps, especially in the case of one developer being the creator of several apps.

“It’s a non-trivial amount of maintenance cost not to add any new features, just keep the thing available,” says Adam Saltsman, cofounder of Finji, the studio behind indie hits like Canabalt, Hundreds and Aquaria. 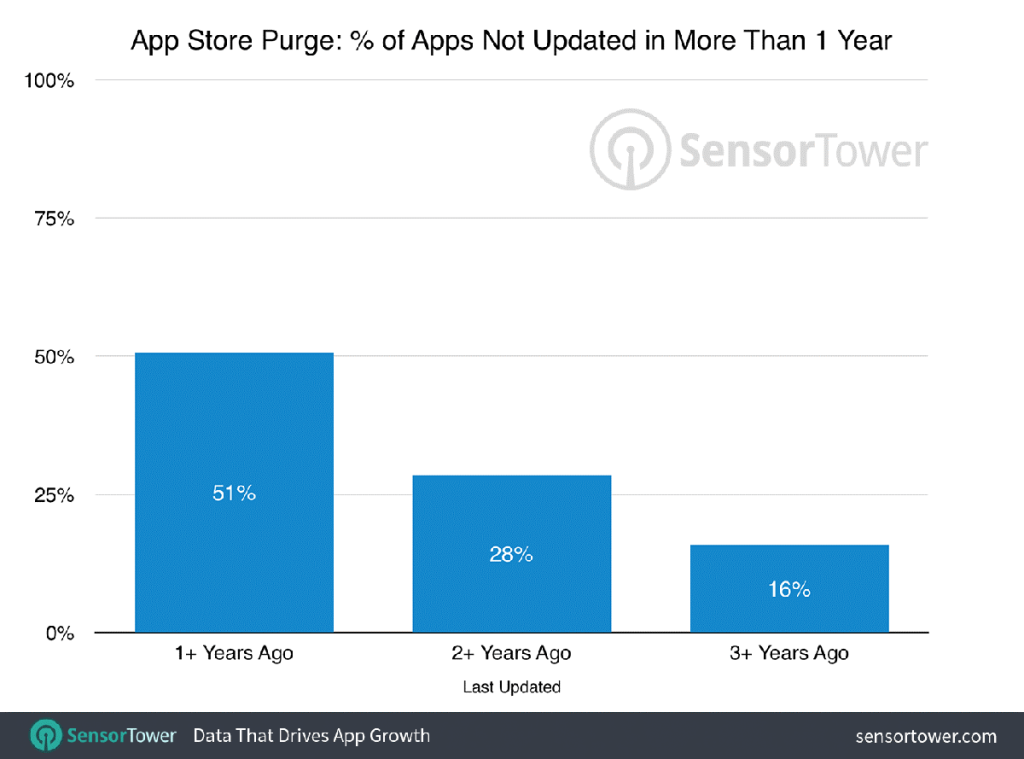 That 32-bit apps will see the end is inevitable. What remains to be seen now is how quickly will the developers adapt to the new standards. And how many popular apps will fall by the wayside. The iOS apocalypse is here and only those who adapt will survive.